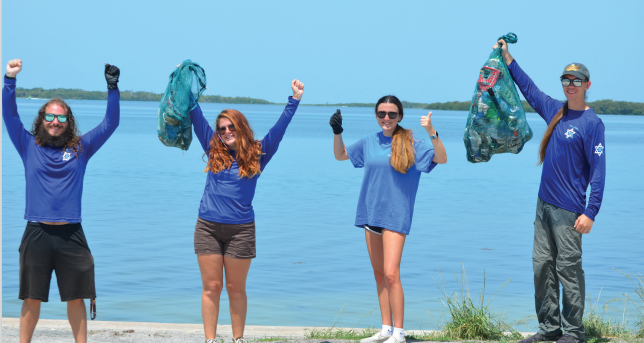 Reverse Tashlich is what happens when we listen to the water. When instead of just ridding ourselves of what we no longer wish to carry, we also unburden the water of the detritus along coastlines that eventually finds its way into the sea.

In 2016, a group of students involved in the college division of Repair the Sea—adorably named Scubi Jew®—came up with the concept of Reverse Tashlich. Instead of adding human sins to the water, they wanted to remove them with a beach clean-up event on Rosh Hashanah. Now in it’s fifth year, the event has expanded to over 170 communities in 18 countries.

Founder of Repair the Sea/Tikkun HaYam, Rabbi Ed Rosenthal hopes to increase the participation this year. The organization’s mission is, “To share the spiritual wonders of water from a Jewish perspective, and to raise awareness of, and encourage action to address the many threats facing the aquatic environment.”

A scuba diver and ocean lover, Rabbi Ed says, “Water is the most abundant substance on the planet and the most taken for granted—without it we die. If the ocean dies, we die.” He envisions creating local chapters to maintain the clean-up work year-round, “I believe that when Jews get involved in issues, substantive change takes place.”

“Water’s like gravity—we just assume it’s always there,” he adds. “If you go to the beach, the ocean looks beautiful, but you only see the surface… we’re not thinking about what I think is the greatest existential threat to the planet right now.”

As we examine the gap between our intentions and our impact when it comes to climate, Reverse Tashlich offers a chance for repair, an opportunity for our intentions to align with our impact. “Everyone talks about climate change,” offers Rabbi Ed, “but they forget that the climate is created by the water. When the aquatic ecosystem is out of balance, everything is out of balance. “Reverse Tashlich allows us the privilege of performing caring actions toward our environment. “The reason we do this is because as Jews our tradition— the mitzvah bal tashchit—the prohibition against needless waste and destruction. It’s a mitzvah,” explains Rabbi Ed.

Rabbi Scott Westle also brings up bal taschit while discussing Reverse Tashlich, adding, “the community of humans has done damage to the ocean and the natural world without really putting much thought to it. There’s no way to avoid the conversation that we are responsible.” Rabbi Scott officiates Valley Beth Shalom’s High Holiday Family Services, which will include their own Reverse Tashlich event on September 27th, the 2nd day of Rosh Hashanah.

“It’s really easy to throw something out,” notes Rabbi Scott, “It’s actually a lot harder to take something back. We know that with our words, and now we know that in actual concrete ways of cleaning up.” A strong appeal of the Reverse Tashlich ritual for Rabbi Scott is, “the marriage of Jewish ritual and deed. Seeing how deed reinforces ritual and ritual reinforces deed creates the perfect virtuous cycle of what religion, in the broadest sense, can be in modern times.”

In our third pandemic year, the Reverse Tashlich event facilitates reconnection on many levels. The ability to gather outside in community to do service is a welcome one that is being embraced by congregations all over the world. It’s not only about coming back together outdoors during a pandemic, but also reconnecting to Jewish values—Tikkun Olam. Rabbi Jillian Cameron of Beth Chayim Chadashim notes that, “It’s about actually repairing the world— environmentally making the world where we live sustainable and better.”

Beth Chayim Chadashim is another local temple participating in Reverse Tashlich. Founded in 1972, BCC is the world’s first synagogue by and for gay and lesbian Jews. BCC is a thriving, progressive, and welcoming Reform Jewish space for the LGBTQIA+ community, our friends, and our families. “Sustainability is part of our ethos,” says Rabbi Jillian, citing their 10-year-old building, which was created with sustainability in mind. The congregation goes to Santa Monica beach annually to perform Tashlich.

“I love the physicalness of Tashlich. The holidays are a lot of sitting and listening—very introspective—solitary even in community. Because of the nature of the High Holidays, which aren’t interactive in many ways, the idea that we get out into the world, leave the synagogue space, and with our community we go into nature… that physical act of using all of the introspection that we did in services, and we take all of our intention and we physically do something. There is power in kinesthetic experience.”

As Rabbi Scott puts it, we are “giving the world the renewal that we are striving for on a personal level.” 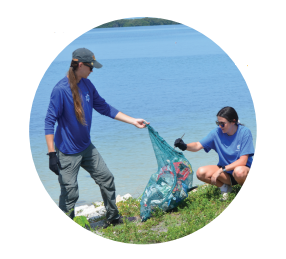 The ceremony of Reverse Tashlich can be done in addition to Tashlich or instead of it. Says Rabbi Scott, “to come together for Reverse Tashlich and to actually say we’re not going to put things into the ocean, even things that are biodegradable, that ducks and the fish will eat—we have the responsibility to clean up the mess,” is meaningful. “Part of growing up is realizing that you have to clean up your own messes, too.”

The opportunity to bring families together in a multigenerational setting where, “a parent and a child can have a conversation about the intersection of Jewish values, Jewish traditions and minhagim, and our responsibility to this world,” offers, “powerful role modelling, where the parents demonstrate for the children,” says Rabbi Scott. “We get to transmit torah values into torah action, and that makes Torah real in this world.”

The idea that many different people will perform this reparative action at the same time holds power. It shifts perspective from a world where, “we all think that we’re the star in our own reality show, “say Rabbi Scott, adding that, “so much of Judaism is about the subsuming of the individual.” For Rabbi Jillian it’s “feeling small, but in a good way,” like the perspective we have when looking at a redwood tree. It’s an “opportunity to be reminded that we are not the center of the world. Gratitude.” 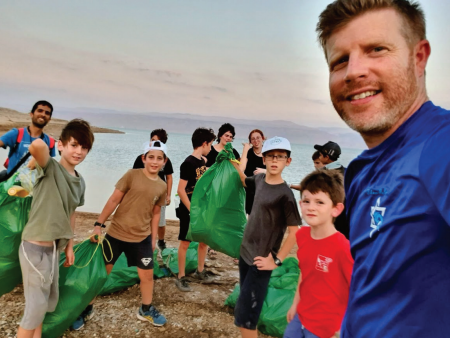 The impact of connecting with the larger Los Angeles Jewish community is a meaningful aspect of the Reverse Tashlich ritual for Rabbi Jillian: “Kol Yisrael feels like an important part of this opportunity. We have agency to help make the world better. We can take time in our holiest part of the year to say that we can take care of this planet we were gifted. What an amazing way to start another year in the Jewish cycle!”

When asked what about Reverse Tashlich is special to the local community, Rabbi Jillian speaks about the, “incredibly long and beautiful coastline used for so many things—it’s part of our community, part of our identity. We have responsibility for such a large swathe of it.”

“Water transcends cultures. Water is purifying in almost every culture,” shares Rabbi Scott, “to get outside, to get your toes in the sand, to dip your toes in the water, put your hands in the earth itself of California—it has such chance for renewal. Water is purifying. G-d is the mikvah of the Jewish people. We know how water can cleanse, and now it’s our time to cleanse the water.” He observes, “The waves will be coming in long after I’m here, been coming long before me… we’re part of a much greater whole.”

Rabbi Ed sees Reverse Tashlich as “a program that can be replicable anywhere and is open to anyone.” He points out that every faith tradition “sees, from a spiritual perspective, the natural world being created by the divine.” Yet, he laments that, “when it comes to the marine environment there’s almost no faith-based conservation.” Creating an interfaith-based conversation to support the work of repair is a key next step. In 2021, Thanet and District Reform Synagogue in Ramsgate, UK participated in the Tashlich event. It evolved from a small local Jewish community event to an interfaith clean-up when the local mayor, who happened to be a Muslim, lent a hand as well as supplies, and the group was joined by the Salvation Army.

Rabbi Ed believes by combining Jewish spirituality with science, Repair the Sea can “raise awareness about the wonders of the sea, coupled with the myriad threats that it’s facing, and how we, as a Jewish community, can make a difference.” In addition to Reverse Tashlich, the organization runs or collaborates on several other programs, including replanting of coral in Israel, and biodegradable dinnerware.

Reverse Tashlich – How to get Involved!

So far, 163 communities are registered for this year’s event on October 2nd.

Registration is open and everyone is welcome. To get involved go to the Tikkun HaYam/Repair the Sea website: repairthesea. org. You can register as an individual, a family, a community, or a temple. It is not too late to create a group to participate! Leaders will receive a useful guide, customized marketing materials, educational resources, and additional support.

If you don’t have a group, it’s also possible to join a community that is already participating. The organization requests that each individual attending should register, even if they are part of a larger group. By doing so, they’ll receive all the communications about the event directly and be counted in the number of participants for the day.

Tags:
Previous Article
Get Inspired The Jewels of Elul
Next Article
I’m Sick of Reflecting 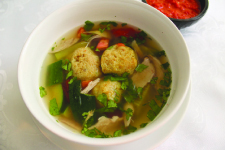 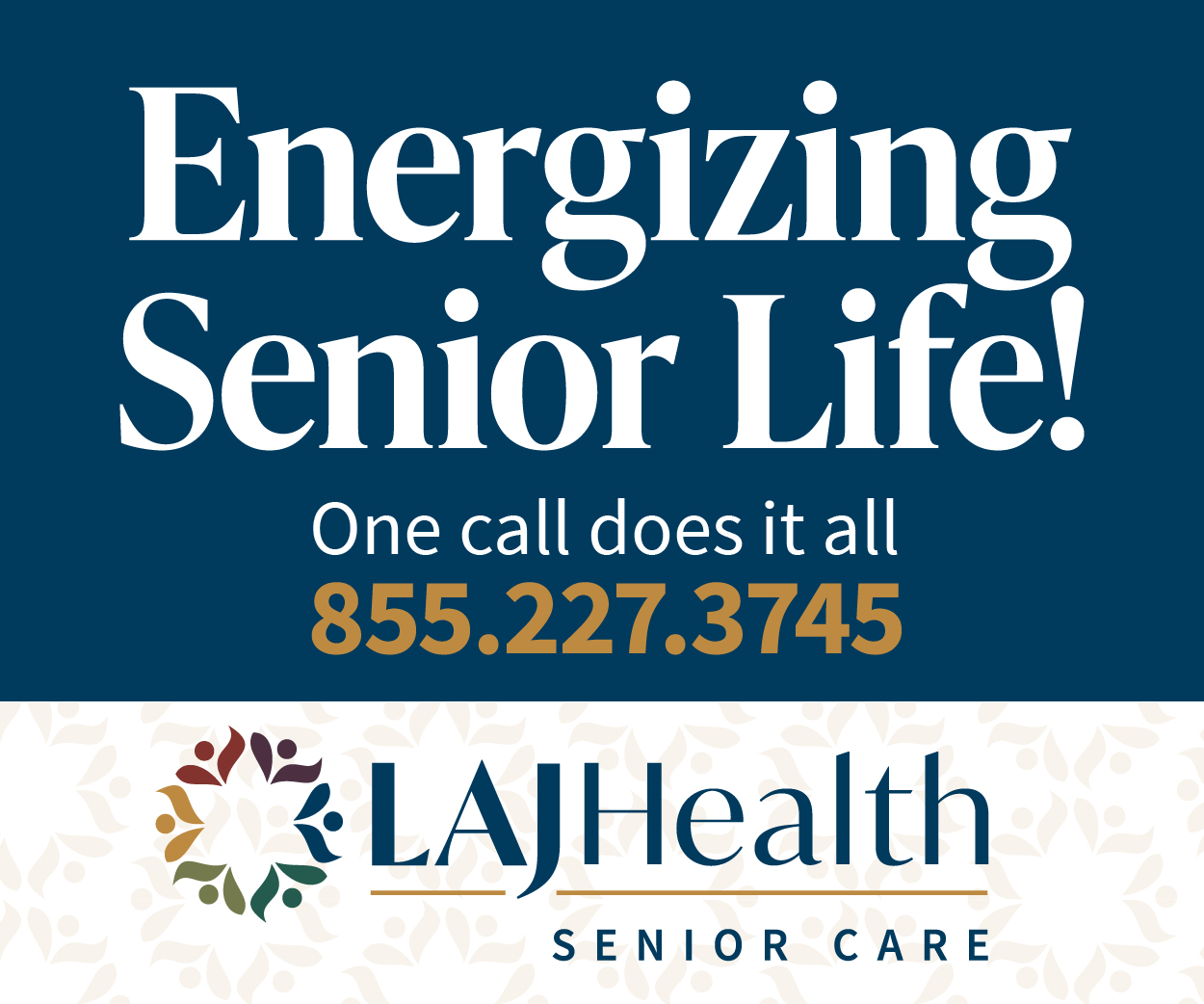 Stay Up to Date with JLiving!

Bringing International Style to your Sukkah

Keeping it Sweet with Local Honey

JLiving Media promises to be a celebration of Jewish Los Angeles.